An error has occurred connecting to the RSS Feed. (x64) Wide Open | WWEnd 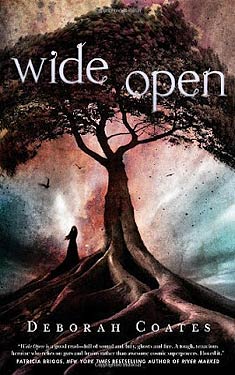 When Sergeant Hallie Michaels comes back to South Dakota from Afghanistan on ten days' compassionate leave, her sister Dell's ghost is waiting at the airport to greet her.

The sheriff says that Dell's death was suicide, but Hallie doesn't believe it. Something happened or Dell's ghost wouldn't still be hanging around. Friends and family, mourning Dell's loss, think Hallie's letting her grief interfere with her judgment.

The one person who seems willing to listen is the deputy sheriff, Boyd Davies, who shows up everywhere and helps when he doesn't have to.

As Hallie asks more questions, she attracts new ghosts, women who disappeared without a trace. Soon, someone's trying to beat her up, burn down her father's ranch, and stop her investigation.

Hallie's going to need Boyd, her friends, and all the ghosts she can find to defeat an enemy who has an unimaginable ancient power at his command.

When Sergeant Hallie Michaels arrived in Rapid City, South Dakota, she’d been traveling for twenty-four hours straight. She sat on the plane as it taxied to the gate and tried not to jump out of her skin, so ready to be up, to be moving, to put her head down and go. And Lord help anyone who got in her way.

She hadn’t been able to reach her father or anyone else by phone since she’d gotten the news, just contact with her commanding officer—We’re sorry, your sister’s dead. Here’s ten days’ compassionate leave. Go home.

Three sharp bongs, and the seat belt light went out. The plane filled with the sound of seat belts snapping, people moving, overhead doors opening up. The woman in the seat next to Hallie’s was still fumbling with her buckle when Hallie stepped past her into the aisle. She felt raw and sharp edged as she walked off the plane and up the Jetway, like rusty barbed wire, like she would snap if someone twisted too hard.

Halfway down the long wide concourse, ready—she was—for South Dakota, for her sister’s funeral for—

Eddie Serrano’s ghost floated directly in front of her, right in the middle of the concourse. She swiped a hand across her eyes, hoped it was an artifact of no sleep and too much coffee, though she knew that it wasn’t.

He looked like he’d just stepped out of parade formation—crisp fatigues, pants neatly tucked into his boots, cap stiff and creased and set on his head just exactly perfect. Better than he’d ever looked when he was alive—except for being gray and misty and invisible to everyone but her.

She thought she’d left him in Afghanistan.

She drew a deep breath. This was not happening. She was not seeing a dead soldier in the middle of the Rapid City airport. She wasn’t. She squared her shoulders and walked past him like he wasn’t there.

Approaching the end of the concourse, she paused and scanned the half-dozen people waiting just past security. She didn’t see her father, had almost not expected to see him because—oh for so many reasons—because he wouldn’t want to see her for the first time in a public place, because he had the ranch and funeral arrangements to take care of, because he hated the City, as he always referred to Rapid City, and airports, and people in the collective and, less often though sometimes more spectacularly, individually.

She spotted a woman with straight blond hair underneath a cowboy hat standing by the windows. Brett Fowker. Hallie’d known Brett since before kindergarten, since a community barbecue when they were five, where Brett had told Hallie how trucks worked and Hallie had taken them both for what turned out to be a very short ride. Brett was all right. Hallie could deal with that.

She started forward again and walked into a cold so intense, she thought it would stop her heart. It felt like dying all over again, like breath froze in her lungs. She slapped her hand against the nearest wall and concentrated on breathing, on catching her breath, on taking a breath.

She looked up, expecting Eddie.

But it was her sister. Dell.

Suddenly, Brett was there, a hand on her arm. “Are you all right?” she asked.

Hallie batted her hand away and leaned heavily against the wall, her breath sharp and quick. “I’m fine!” Her voice sounded rough, even in her own ears.

Dell looked exactly as she had the last time Hallie’d seen her, wearing a dark tailored shirt, jeans with a hole in one knee, and cowboy boots. She was a ghost now and pretty much transparent, but Hallie figured the boots were battered and scuffed because she’d always had a favorite pair that she wore everywhere. Even when she’d dressed up sometimes, like no one would notice the boots if she wore a short black dress and dangly silver earrings. And no one did—because it was Dell and she could carry something like that off, like it was the most natural thing in the world.

Hallie scrubbed a hand across her face. Goddamnit, Dell. She wasn’t going to cry. She wasn’t.

Brett said it over and over, like a mantra, her right hand a tight fist in Hallie’s sleeve. In sixth grade after Hallie’s mother died, she and Brett had made a no-hugging-ever pledge. Because no one had talked to Hallie that whole week, or looked her in the eye—just hugged her and handed her casserole dishes wrapped in aluminum foil.

Trust Brett to honor a pact made twelve years ago by eleven-year-olds.

“Hallie!” Suddenly someone was hugging her. “Oh god, Hallie! Isn’t it awful?”

Lorie Bixby grabbed her around the neck, hugged her so tight, Hallie thought she might choke. “It can’t be right. I know it’s not right. Oh, Hallie…”

Hallie unwound Lorie’s hands from her neck and raised an eyebrow at Brett, because Lorie hadn’t been particular friends with Brett or Hallie back in school, though they’d done things together, because they lived close—for certain definitions of close—and were the same age. Hallie hadn’t seen her since she’d enlisted.

Brett raised her left shoulder in a half shrug, like she didn’t know why Lorie was there either, though Hallie suspected it was because Brett hadn’t wanted to come alone.

They were at the top of the stairs leading down to the luggage area and the parking lot. To Hallie’s left was a gift shop full of Mount Rushmore mugs and treasure maps to gold in the Black Hills. To her right was a café. It beckoned like a haven, like a brief respite from Afghanistan, from twenty-four hours with no sleep, from home.

But really, there was no respite. This was the new reality.

“Tell me,” Hallie said to Brett.

Brett hadn’t changed one bit since Hallie’d last seen her, hadn’t changed since she’d graduated from high school, except for the look on her face, which was grim and dark. She had perfect straight blond hair—cowgirl hair, Hallie and Dell had called it because all the perfect cowgirls in perfect cowgirl calendars had hair like Brett’s. She was wearing a bone-colored felt cowboy hat, a pearl-snap Western shirt, and Wranglers. “Tell you?” she said, like she had no idea what Hallie was talking about.

“What happened,” Hallie said, the words even and measured, because there were ghosts—Dell’s ghost, specifically—in the middle of the airport, and if she didn’t hold on tight, she was going to explode.

Brett drew a breath, like a sigh. “You should talk to your daddy about it.”

“Look, no one believes it was really suicide.” Lorie leaned toward them like this was why she’d come, to be with people, to talk about what had happened.

“What?” No one had mentioned suicide to her—accident, they’d said. There’s been a terrible accident.

“No one knows what happened yet,” Brett said cautiously, giving Lorie a long look.

Brett didn’t look at Hallie, her face obscured by the shadow of her hat. “They say,” she began, like it had all happened somewhere far away to people who weren’t them. “She was out driving over near Seven Mile Creek that night. Or the morning. I don’t know.” Like that was the worst thing—and for Brett, maybe it was—that she didn’t have all the particulars, the whys and wherefores. “She wracked her car up on a tree. There was no one else around. They’re saying suicide. But I don’t— No one believes that,” she added quickly. “They don’t.” As if to convince herself.

She walked away. This was not a discussion.

She didn’t look to see if Brett and Lorie were behind her until she was halfway to the luggage carousel.

Five minutes later, they were crammed into Brett’s gray Honda sedan. Hallie felt cramped and small sitting in the passenger seat, crushed under the low roof. Lorie sat in the back, an occasional sniff the only mark of her presence.

Brett turned the key in the ignition, the starter grinding before it caught. Hallie felt cold emanating from Eddie’s and Dell’s ghosts drifting behind her in the backseat. Though Lorie didn’t act as if she could feel them at all.

“She called me,” Brett said as she pulled out of the parking lot.

“What?” Because Dell and Brett hadn’t been friends.

“Yeah, right out of the blue,” Brett said.

“Monday morning. That morning.” Brett swallowed, then continued. “She wanted me to skip classes—I’m working on a master’s in psychology, you know—well, you don’t know, I guess.” It didn’t surprise Hallie. Brett had always wanted to know how things worked, even people. She’d been a steady B student in high school, but she worked until she knew what she wanted to know or got where she wanted to get.

“I’m thinking about University of Chicago for—” Brett stopped, cleared her throat, and continued. “She said she wanted to celebrate.”

“And she called you?”

“Shit, I don’t know, Hallie,” Brett said. “She called, said she wanted to celebrate. Suggested horseback riding up along, well, up along Seven Mile Creek. It was weird.”

“Maybe she didn’t have anyone to ride with anymore.”