An error has occurred connecting to the RSS Feed. (x64) Grave Peril | WWEnd 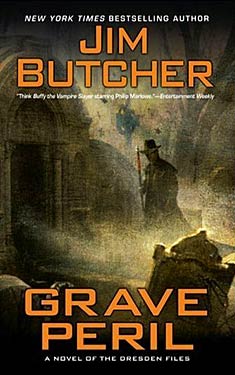 Harry Dresden's faced some pretty terrifying foes during his career. Giant scorpions. Oversexed vampires. Psychotic werewolves. It comes with the territory when you're the only professional wizard in the Chicago area phone book.

But in all Harry's years of supernatural sleuthing, he's never faced anything like this: the spirit world's gone postal. All over Chicago, ghosts are causing trouble - and not just of the door-slamming, boo-shouting variety. These ghosts are tormented, violent, and deadly. Someone - or something - is purposely stirring them up to wreak unearthly havoc.

But why? And why do so many of the victims have ties to Harry? If Harry doesn't figure it out soon, he could wind up a ghost himself....

There are reasons I hate to drive fast. For one, the Blue Beetle, the mismatched Volkswagen bug that I putter around in, doesn't usually manage anything above sixty miles an hour. For another, I don't get along so well with technology. Anything manufactured after about World War II seems to be susceptible to abrupt malfunction when I get anywhere close to it.

As a rule, when I drive, I drive very carefully and sensibly.

Tonight was an exception to the rule.

The Beetle's tires screeched in protest as we rounded a corner, clearly against the No Left Turn sign posted there. The old car growled gamely, as though it sensed what was at stake, and continued its valiant puttering.

"Can we go any faster?" Michael drawled. It wasn't a complaint. It was just a question, calmly voiced.

"Only if the wind gets behind us or we start going down a hill," I said. "How far to the hospital?"

The big man shrugged his shoulders and shook his head. He had that kind of salt-and- pepper hair, dark against silver, that some men seem lucky enough to inherit, though his beard was still a solid color of dark brown, almost black. There were worry and laugh-lines at the corners of his leathery face. His broad, lined hands rested upon his knees, which were scrunched up due to the dashboard. "I don't know, for certain," he answered me. "Two miles?"

I squinted out the Beetle's window at the fading light. "The sun is almost down. I hope we're not too late."

"We're doing all we can," Michael assured me. "If God wills it, we'll be there in time. Are you sure of your . . ." his mouth twisted with distaste, "Source?"

"Bob is annoying, but rarely wrong," I answered, jamming on the brakes and dodging around a garbage truck. "If he said the ghost would be there, it will be there."

"Lord be with us," Michael said, and crossed himself. I felt a stirring of something; powerful, placid energy around him—the power of faith. "Harry, there's something I've been meaning to talk to you about."

"Don't ask me to Mass again," I told him, uncomfortable. "You know I'm just going to say no." Someone in a red Taurus cut me off, and I had to swerve around him, into the turn lane, and then ahead of him again. "Jerk!" I howled out the driver's window.

"That doesn't preclude asking," Michael said. "But no. I wanted to know when you were going to marry Miss Rodriguez."

"Hell's Bells, Michael," I scowled. "You and I have been chasing all over town for the past two weeks, going up against every ghost and stray spirit that has all of a sudden reared its ugly head. We still don't know what's been causing the spirit world to go postal."

"At the moment," I interrupted, "we're going after one nasty old biddy at Cook County, who could kill us both if we aren't focused. And you're asking me about Susan and my love life."

Michael frowned at me. "You're sleeping with her, aren't you," he said.

"Not often enough," I growled, and shifted lanes, swerving around a passenger bus. "But we're both so busy."

The knight sighed. "Do you love her?" he asked.

"Michael," I said. "Give me a break. Where do you get off asking questions like that?"

"Do you love her?" he pressed.

"Harry," he asked, smiling. "Do you love the girl or don't you? It isn't a difficult question."

"Speaks the expert," I grumbled. I went past a blue-and-white at about twenty miles an hour over the speed limit, and saw the police officer behind the wheel blink and spill his coffee as he saw me go past. I checked my cracked rear-view mirror, and saw the blue bulbs on the police car whirl to life. "Dammit, that tears it. The cops are going to be coming in right after us."

"Don't worry about them," Michael assured me. "I just want to know, Harry. Do you love Susan?"

I was silent for a second, and then flashed Michael a glance. He watched me, his face broad and honest, his jaw strong, and his grey eyes flashing. His hair was cropped close, Marine-length, on top, but he sported a short, warrior's beard that he kept clipped close to his face. "I suppose so," I said, after a second. "Yeah."

"Then you don't mind saying it?"

"Saying what?" I stalled.

"Harry," Michael scolded, holding on as we bounced through a dip in the street. "Don't be a child about this. If you love the woman, say so."

"You haven't told her, have you. You've never said it."

"Harry Dresden," he said. "You, of all people, should know the power of a few words."

"Look, she knows," I said, tapping the breaks and then flattening the accelerator again. "I got her a card."

He sighed. "Let me hear you say the words."

"If it will get you off my back," I said, and gave the Beetle every ounce of gas that I could. I could see the police in traffic somewhere behind me. "All right," I flashed Michael a ferocious, wizardly scowl and snarled, "I love her. There, how's that?"

Michael beamed. "You see? That's the only thing that stands between you two. You're not the kind of person who says what you feel. Or who is very introspective, Harry. Sometimes, you just need to look into the mirror and see what's there."

"Regardless, you needed to realize that you do love the woman. After Elaine, I thought you might isolate yourself too much and never—"

I felt a sudden flash of anger and vehemence. "I don't talk about Elaine, Michael. Ever. If you can't live with that, get the hell out of my car and let me work on my own."

Michael frowned at me, probably more for my choice of words than anything else. "I'm talking about Susan, Harry. If you love her, you should marry her."

"I'm a knight," Michael responded. "And I have the time. It's worth it. You're alone too much. It's starting to show."

I scowled at him again. "What does that mean?"

"You're tense. Grumpy. And you're isolating yourself more all the time. You need to keep up human contacts, Harry. It would be so easy for you to start down a darker path."

Cook County Hospital loomed into sight, and I made an illegal U-turn to get the Blue Beetle up into the emergency entrance lane. Michael unbuckled his seatbelt, even before the car had come to a stop and reached into the back seat to draw an enormous sword, fully five feet long in its black scabbard, from the back seat. He exited the car and buckled on the sword. Then he reached back in for a white cloak with a red cross upon the left breast, which he tossed over his shoulders in a practiced motion. He clasped it with another cross, this one of silver, at his throat. It clashed with his flannel workman's shirt, blue jeans, and steel-toed work boots.

"Can't you leave the cloak off, at least?" I complained. I opened the door and unfolded myself from the Beetle's driver seat, stretching my long legs, and reached into the back seat to recover my own equipment—my new wizard's staff and blasting rod, each of them freshly carved and still a little green around the edges.

Michael looked up at me, wounded. "The cloak is as much a part of it as the sword, Harry. Besides, it's no more ridiculous than that coat you wear."

I looked down my lean body at my black leather duster, the one with the large mantle that fell around my shoulders and spread out as it went down to billow in a most heavy and satisfactory fashion around my legs. My own black jeans and dark western shirt were a ton and a half more stylish than Michael's costume. "What's wrong with it?"

"It belongs on the set of El Dorado," Michael said. "Are you ready?"

I shot him a withering glance, to which he turned the other cheek with a smile, and we headed towards the doors. We drew a large number of stares.I could hear police sirens closing in behind us, maybe a block or two away.

"This is going to be close."

"Then best we hurry." He cast the white cloak back from his right arm, and put his hand on the hilt of the great broadsword. Then he bowed his head, crossed himself, and murmured, "Merciful Father, guide us and protect us as we go to do battle with the darkness." Once more, there was that thrum of energy around him, like the vibrations of music heard through a thick wall.

I shook my head, and fetched a leather sack, about the size of my palm, from the pocket of my duster. I had to juggle staff, blasting rod, and sack for a moment, and wound up with the staff in my left hand, as was proper, the rod in my right, and the sack dangling from my teeth. "The sun is down," I grated out. "Let's move it."

And we broke into a run, knight and wizard, through the emergency entrance of Cook County Hospital. We drew no small amount of stares as we entered, my duster billowing out in a black cloud behind me, Michael's white cloak spreading like the wings of the avenging angel whose namesake he was. We pelted inside, and slid to a halt at the first intersection of cool, sterile, bustling hallways.

I grabbed the arm of the first orderly I saw passing by. He blinked, and then gawked at me, from the tips of my western boots to the dark hair atop my head. He glanced at my staff and rod rather nervously, and at the silver pentacle amulet dangling at my breast, and gulped. Then he looked at Michael, tall and broad, his expression utterly serene, at odds with the white cloak and the broadsword at his hip. The man gulped, taking a nervous step back. "M-m-may I help you?"

I speared him into place with my most ferocious, dark-eyed smile and said, between teeth clenched on the leather sack, "Hi. Could you tell us where the nursery is?"

There are currently no reviews for this novel. Be the first to submit one! You must be logged in to submit a review in the BookTrackr section above.